The men’s quad scull also took out the end—of-day sprint title at London Docklands, while there were also 10 second places including by a canvas for Cedol Dafydd (University of Bath RC) and Aidan Thompson (Twickenham RC) in the doubles.

The Wales team had to wait until the last race of the 2km programme to taste victory, but it was well worth waiting for as the men’s 8 led from the off to repeat the triumphs of 2008, 20012 and 2015. 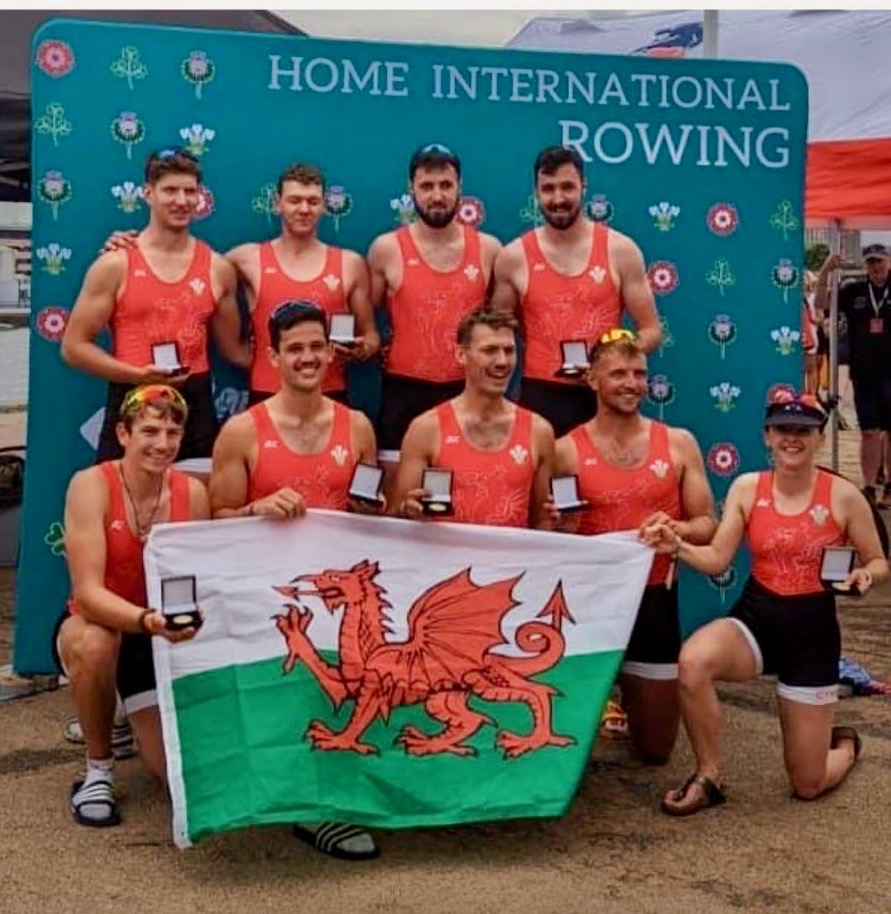 The Welsh boat had 1/4L lead from England at 500m and made a decisive move in the second quarter, moving out to take clear water.

The margin was neary 2L at 1500m before England under pressure from the Irish in third squeezed the margin to just over a length on the line, reached by Wales in six minutes 24.67 seconds.

In the end-of-day 500m sprints, England managed to reverse the order, but by then Wales had added a second win in the men’s sprint quads, Dafydd and Thompson teaming up with Molesey and Llandaff sculler Stephen Cox and Thames RC’s Finnegan Regan to speed home a length clear of the Scots in 1.37.68.

Earlier in the 2km programme, Dafydd and Swansea University graduate Thompson had gone agonisingly close to victory in the men’s doubles, bursting out to lead by 3/4L at half-way and a length at the 1500m mark.

But a grandstand finish by the Irish spoiled the party as Wales lost out by just 0.7 secs in 7.24.34.

Men’s coxed four Jones, Robinson-Ranger, Westall, Tilt and Wenyon held second through each marker behind England to finish 2L up on third-placed Ireland.

And Rebecca Wilde of Bath University pressured England’s Kathyrn Mole for the length of the course to take second in the women’s singles, with just a length in it on the line as the latter crossed in 8.49.42.

Junior men’s doublers Jackson Innes (Hereford Cathedral) and Gwilym Johnson (Wycliffe) also chased home the English, finshing 2L back in 7.43.68 after rowing through the Irish in the last quarter.

Jackson and Johnson also joined Northwich’s Dylan Howard and Hartpury’s Ewan John in the boys’ quads to lead through 500m before missing out by just 3/4L to England in 7.09.10.

Cardiff & Vale product Megan Hadfield (Shiplake) - sister of GB U23 world medallist Iwan – teamed up with Mica Hird (King’s Chester) to also take an excellent second in girls’ pairs behind the England duo from Henley RC’s junior centre of excellence, leading at 500m before coming home 3L back and the same margin ahead of the Scots in 9.37.70.

Stephen Cox was just over 1/2L off second in the men’s singles, while Megan Hadfield missed out on the same position in junior girls’ singles by feet, only 0.4 secs back.

The women’s coxless four, junior men’s pair, and boys’ and girls’ junior quads were all fighting thirds, while the women’s double and men’s quad scull were just 2L behind the winners in fourth in really close races.